December came and with good weather too, this opened up new opportunities to fish a new part of the season from the boat which was exciting. I had searched out some new ground with my friend Marcus which was his first trip in my boat.

We found structure with good tidal movement which was clearly holding fish and had a really enjoyable day playing with some tidy bass to 65cm off the top. I really hadn’t expected this in December but it was very refreshing. 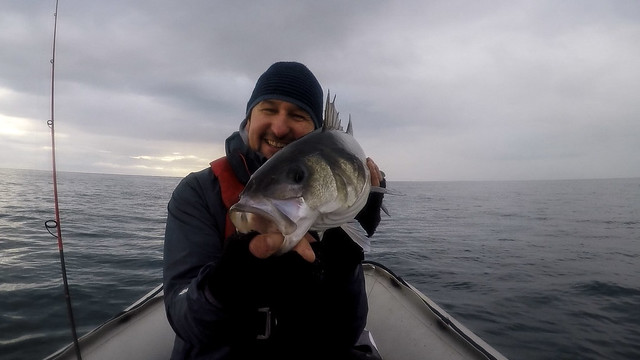 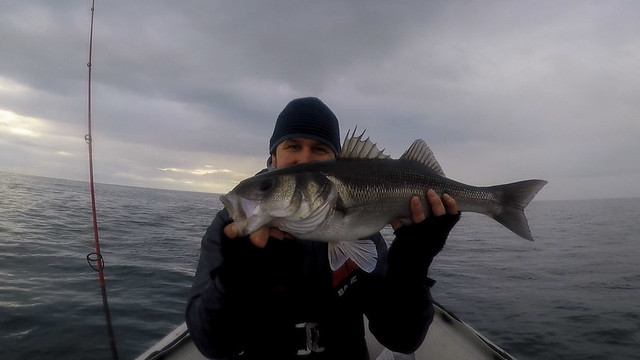 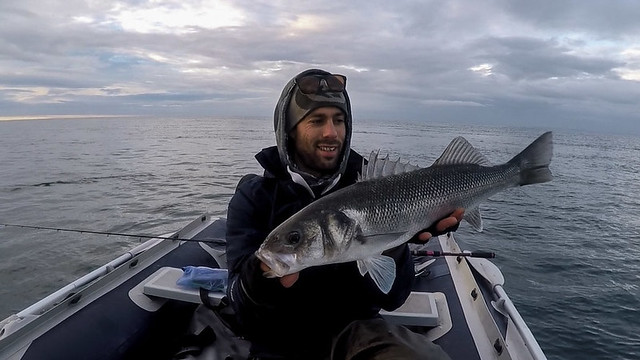 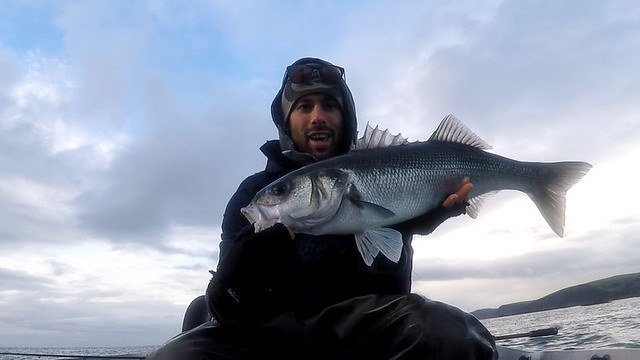 The Patchinko was really proving its worth to me this day worked in a more aggressive walk the dog than I normally would and Marcus was enjoying using the new Savagegear surf walker!

The next day I had said to fish with Mark and we returned to try the area again on a slightly better tide. With more of an idea where to fish we certainly had an advantage over the previous day and an earlier start… It was mental to say the least. By far the best days surface fishing I’ve had to date. Marks best was 75cm and mine was high 60’s… with a good number over 60cm. Unfortunately we only got to fish a small part of the tide and had to retire home early as the wind got up. 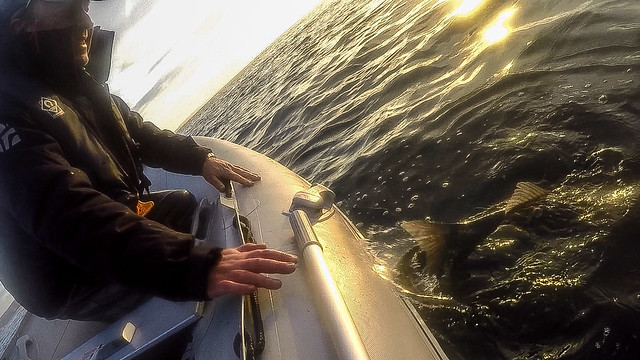 The only photo of Marks 75cm as it was bleeding badly so we got it straight back in the water ASAP and my camera skills weren’t on form. 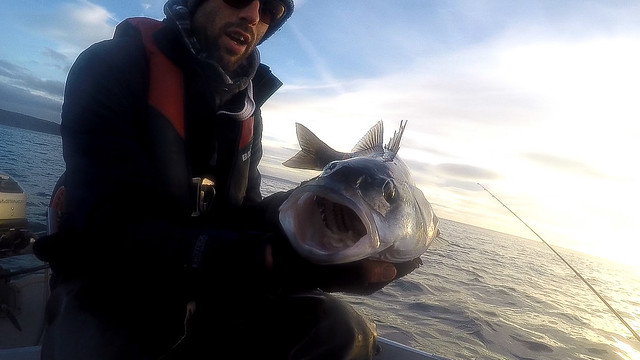 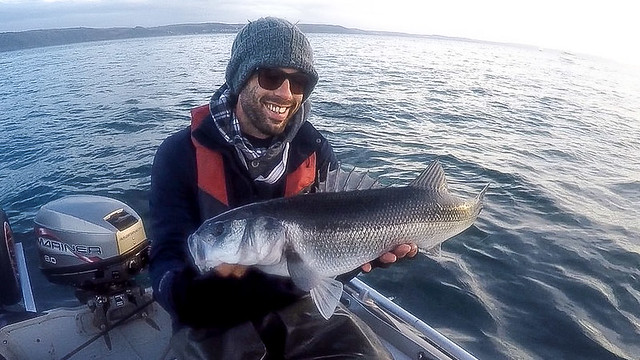 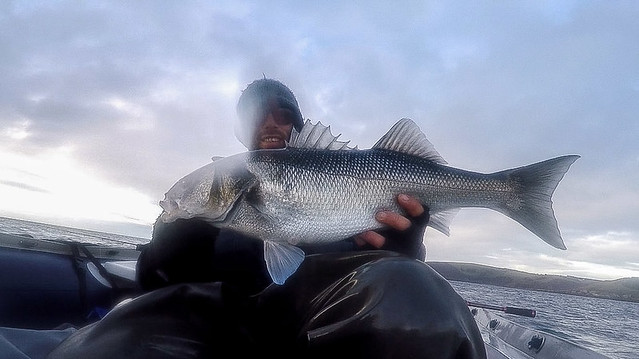 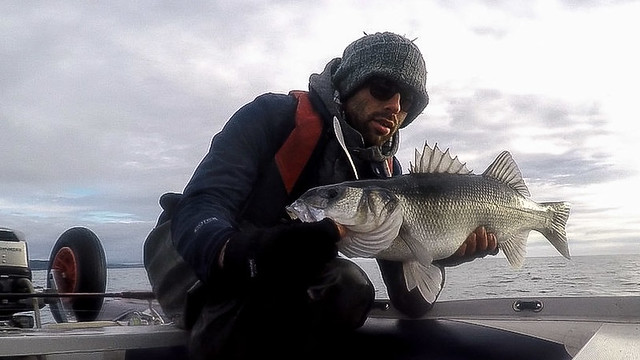 Patchinko was doing the buisness for me again unitl a monster dragged me to ground behind a rock and that was another one gone! Only about 6 Patchinko’s I lost that year! The Sammy 115 was also doing the buisness for us along with Marks Mag popper and my Gunfish 115! This day I also witnessed a Pollock and a bass both spit out large herring about 7 inches long. They had clearly been feeding hard!

Well I was back the day after too… it wasn’t anywhere near as electric as the other days but I still managed 16+ bass to mid 60’s with plenty missed fished along the way. I also got to learn a lot more today about the ground I was fishing. The features and where the fish had been holding in holes and in front of rocks etc… Which I find the most interesting. 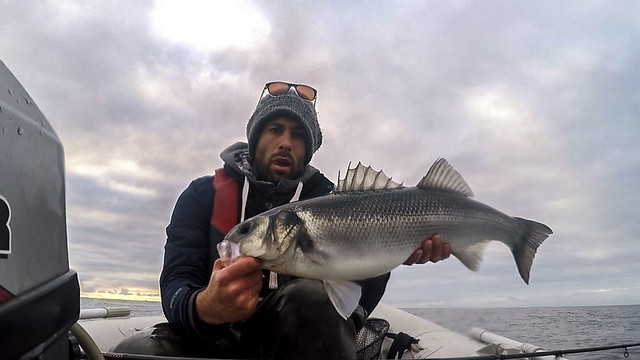 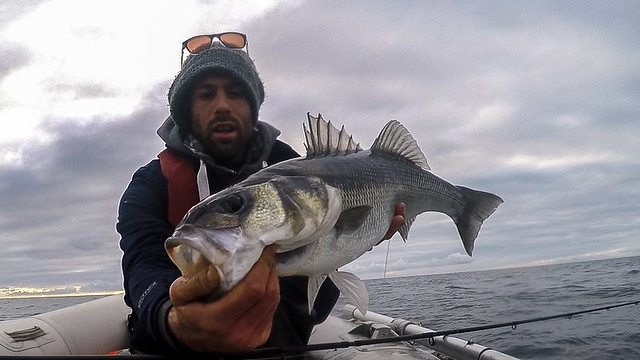 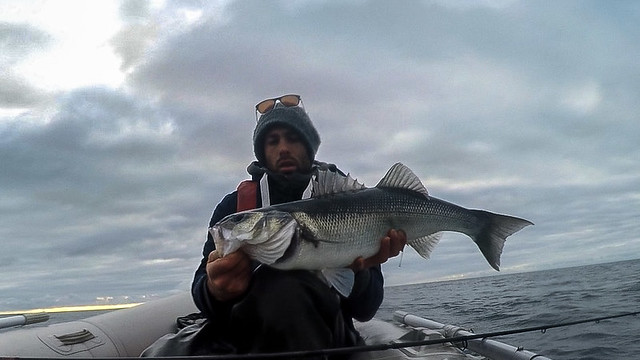 I was also without my favourite Ghost lancon Patchinko today but did pull my very first Nacre one out of retirement. I personally don’t think that it or the Savage gear panic prey where as good as the Ghost Lancon Patchinko… Once again the Sammy 115 and Gunfish picking up all the pieces!

The next opportunity came near mid December with small window of ok weather. This was Marks second session and a cracker it turned out to be. It was a struggle with the conditions early on but the wind dropped though the day making life easier. We had to work harder to find some fish but when we did it did go off with double hook ups of high 60cm off the surface. Patchinko was doing the buisness and I had a replacement by now! We had another good day with 36 fish to the boat and nearly all taken off the surface. The other fish taken on SP weren’t of any size either. I had been experimenting with weighltess soft plastics each session and even though they had accounted for a few small fish the got to technique was clearly the surface. 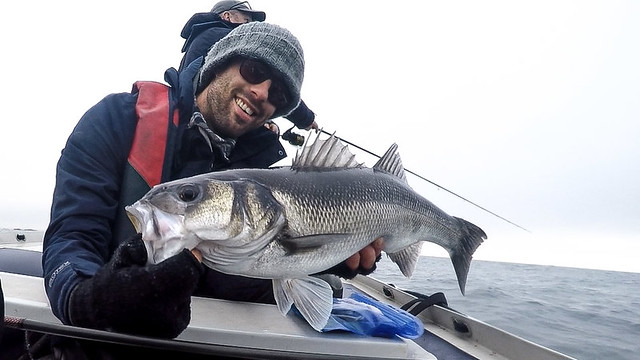 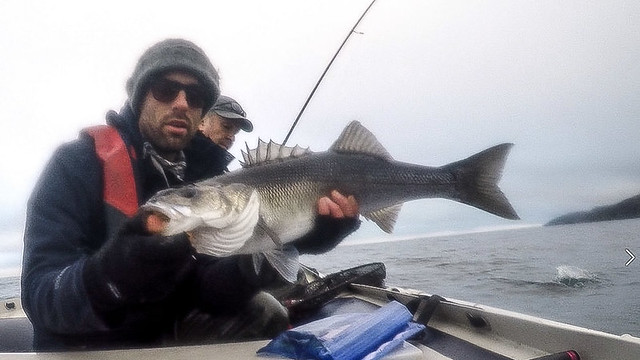 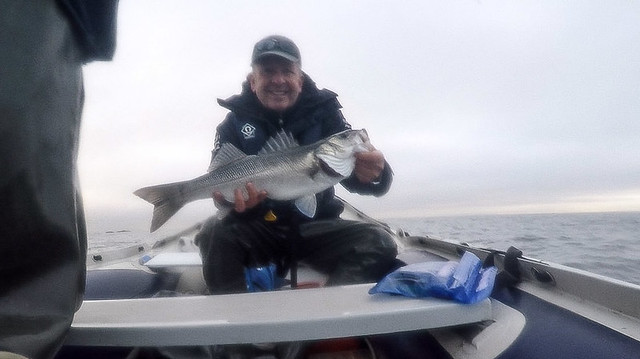 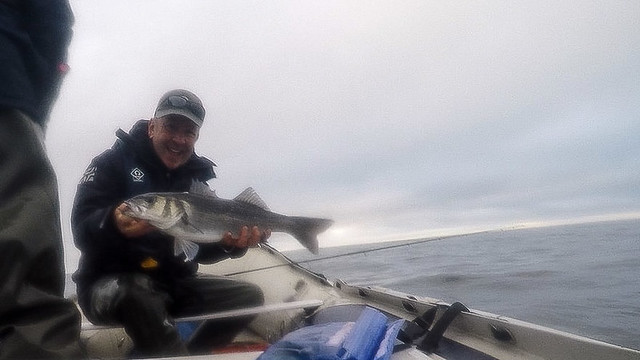 Nearly christmas and my good mate Tim decided he was going to come for a session! About time but you’ve left it a little late mate! It started off difficult for the first few hours and Tim was having his doubts about me, the place we where fishing and the technique… The conditions improved and I felt confident at the stage of tide. I was sure we could find some fish amongst the features and finally it happened. First a few schoolies, then a couple missed big fish. Tim was excited like a little kid. This was the first day I had failed to land a 60cm plus fish but Tim showed me how it was done nailing a 73cm on a 150 Asturie and a couple other lovely fish. The sea went completely flat and the big Asturie’s where really pulling the fish in. I hadn’t seen the water this clear either and it was great to finally see some of the bottom that we had been fishing. We both left smiling today, he was in awe of the December topwater action and was just happy he could experience it. 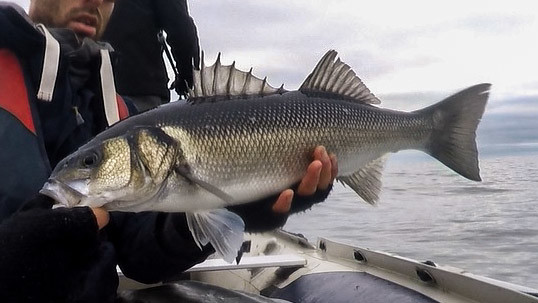 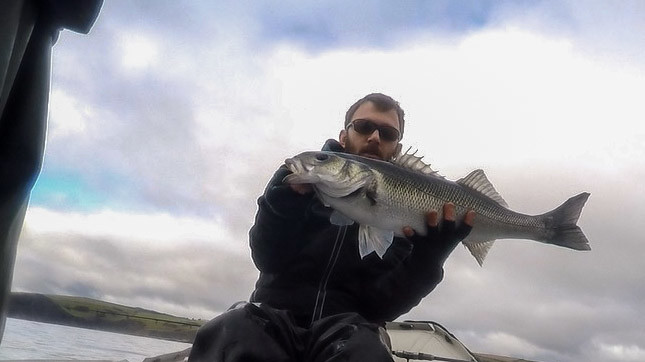 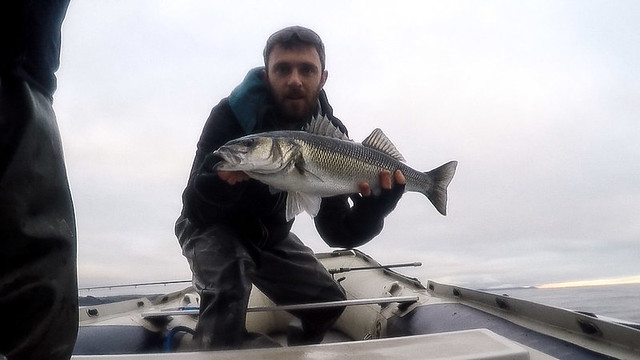 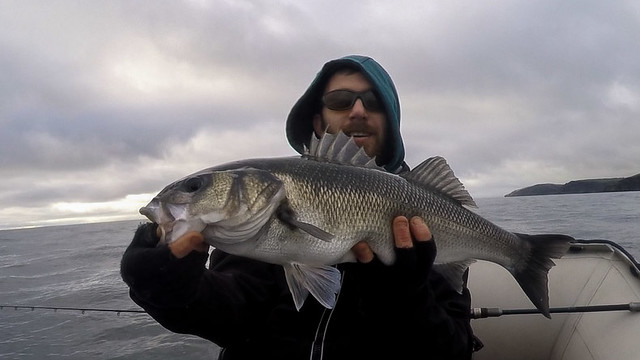 I had been meaning to meet up with Matt spence as well as he had said we should meet up. He has been fishing a small inflatable for a long time and I drew Inspiration from him and his friend Julian’s expeditions. The weather wasn’t looking great but it was just about fishable and so we had to give it a go. This was by far the worst day weather wise, the wind chop was awful. In fact I didn’t feel confident on the surface at all. Matt prefers his soft plastics so it would be interesting to see if he could have more luck than we had on them. I stuck to the surface as I felt this was going to be the best way to get a reaction from these fish. I managed a few hits amongst the mess but the fish where only hitting once and not returning. I finally convinced Matt this was the way forward and soon his trusty Mag popper was on the end of his line and singing a sweet song. Clearly! as a fine fish engulfed the lure and a fine 71cm fish was landed. It was a tough day and it was a real struggle in the conditions but we landed a few small fish through the day and missed a few so it kept the spirits up. We kept working a patch that we felt was being more productive and towards the end Matt was rewarded with another fine fish of just under 70cm. That was job done from a guiding point of view for me, I had failed yet again but that was no bother as once again I got to share this experience with someone else. Something clicked on that last fish though and we re set the drift and I changed my technique to cranking and popping the Patchinko a technique that hadn’t  been working for me here. The next drift resulted in a decent fish attacking my lure. Side swipes and a couple big explosions through the choppy water. Crap that was close… It was getting dark now too, this really was going to be the last chance of the year. Next drift, same place, BOOM… I won’t forget that big black back as it side swiped the lure twice. The look on Matts face, I knew that was a big fish. Possibly the fish I have been waiting for. Come and gone so close with the last possible chance of the year. Gutting but very cool to see and I welcomed the opportunity. 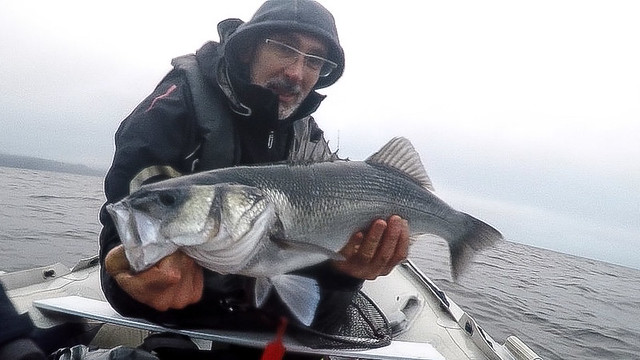 and that marked the end of 2017. A lot learned and a lot of fun had…. Once again I can not wait to start the new season. In fact it’s just around the corner right now and I have a new challenge to take on as well…