The last of the sun for 2015??? We are mid October now but I hope there are more days like this to come as I enjoy every day I get to go out on the boat. The SIB has been a tremedously fun bit of kit this year and has given me a new angle on my fishing. Me and Kory jumped at the opportunity to get out  when I saw a break in the weather…

As I’m still learning new marks on the boat I can only expect things judging from my experiences from the shore and assume things might happen now and then. Well they didn’t and to my surprise even when it was fairly choppy and there wasn’t much in the way of light I still had the fish hitting my surface lure in around 25ft of water. The lure of choice was the Sammy 105 in a ghost sandeel colour and It comes with a rather nice loud but solid sounding rattle…

I missed a good few fish on this first drift of the reef. Up to 5 hits on a retrieve yet I still didn’t manage to get a hook hold on a fish. This was the start though of a very fun day. Even with a slight offshore wind the fish where still plenty turned on to attacking the lures.

Kory got under way and he was using his Sammy 100 in the same pearl chartreuse colour that Tim loves so much…  and I was in soon after. We where off… 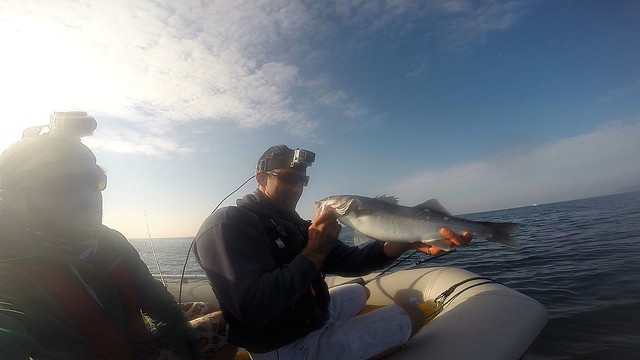 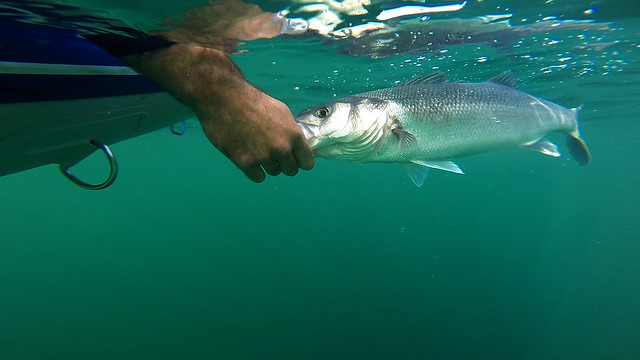 The action was steady all day with attention given to our lures on each drift but I was hooking into a third of the fish I was seeing and Kory, well, he had it all… He was barely missing a fish! 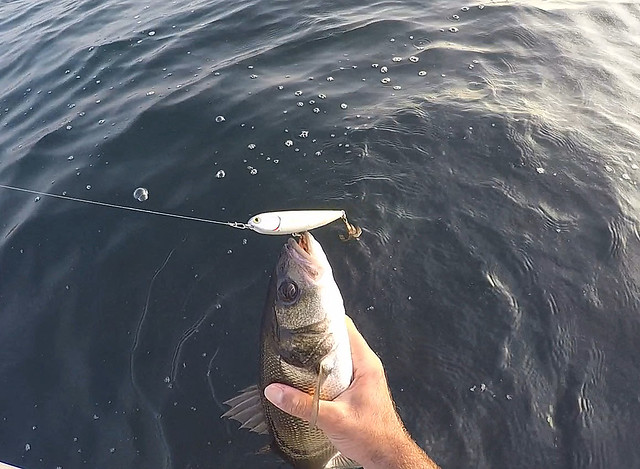 The action slowed at the top of the tide and Kory had brought with him some slow jigs to play with so I moved us a bit further out and tried to position us over another part of reef. Kory had a surprising visitor come up for his slow jig first. A Cuttle that eventually got a grip on it but it was never hooked…

Kory took a couple small pollock and me a wrasse before he hooked into a better fish. It must have been a good pollock as it went crashing back down to the reef after hitting Kory’s lure mid water. His drag was singing until it shook the hook. That was gutting but I have to admit I was intrigued by the amount of attention the slow jigs got and Kory was impressed with there first outing.

We soon moved back over my favourite bit of reef for more topwater action, this is when the wind completely dropped and we where left floating in the sun on a sheet of glass. Something I have only had the pleasure of witnessing once this year on the boat. We sat at the back of the reef where it drops off into deeper water, we could barely make out the bottom in the crystal clear water. It must have been 30ft or more. I mixed it up and went for a louder lure hoping to draw something up from the deep. I slowly popped and waked my Cotten Cordell pencil when a got a good swirl but once again no hookup! Kory had his silent Austrie 110 on and soon took a small schoolie… I’d got this all wrong!

This is when I looked down into the deep only to be left a little bemused… Funny pattern to the kelp I thought… I got closer to the water and low and behold the kelp was moving all be it very slowly. It wasn’t the kelp but bass! I thought it was the odd bit of white kelp you get that I could see but in fact it was lots of silvery backs… I looked in amazement. Kory kept on fishing and was drawing them off the bottom with his Austrie but they wouldn’t commit.Too close to the boat perhaps? probably or just there usual behavior? There’s so much to learn about these fish and this is why I’m loving the SIB. I get to see another side to there behavior. Now I’ve witnessed all kinds of scenes from the shore and some things way more epic than anything I will probably see from the boat but you see a lot more from the boat and that just adds another dimension to this fishing. I tried to film them but the footage didn’t come out great. Kory was still playing with them though. 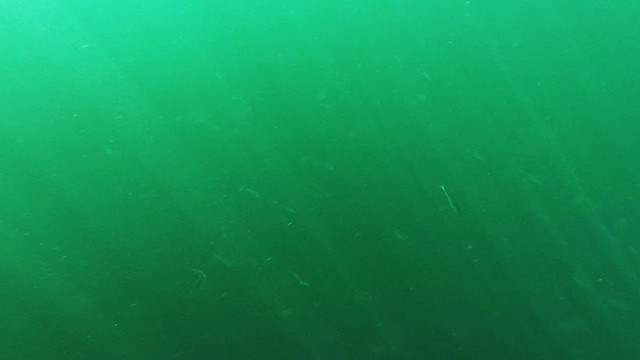 Terrible photo but the video looks better! It was like looking into an aquarium!

We carried on fishing and left them be. We took plenty more fish and had plenty more action. The biggest fish was probably around the 56-57cm mark and plenty where 50+ all excellent fun off the top that’s for sure. 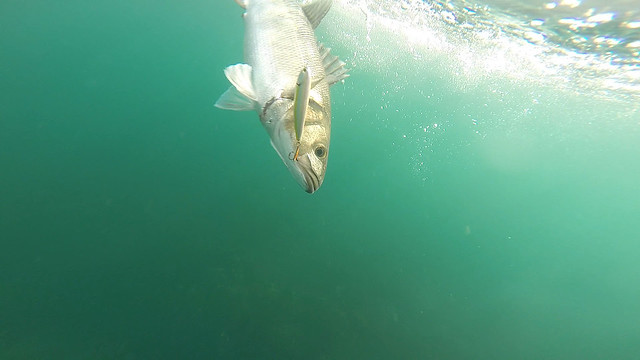 Treble hooks… I honestly hate them. This fish was badly injured from them. I haven’t had the best eperience with singles on hard lures but I will have to play with them more in the future. 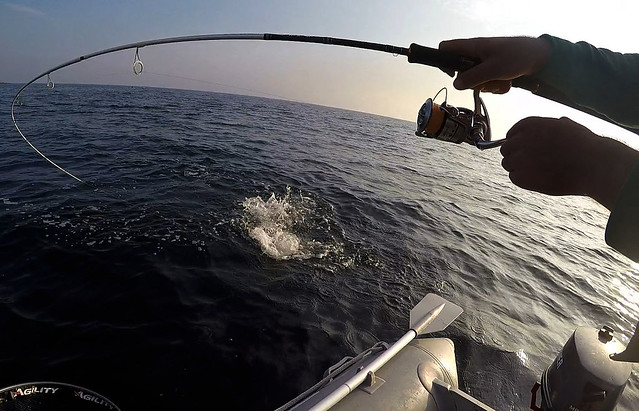 We could have sat around here all day but had to try and mix it up at times as you never know what might be better or what could get you a better fish. Kory managed a nice mid 50 fish on a Hart 120 missile? That he wanted to try out… he cast out and bang it was fish on. A classic jerky retrieve like I generally do with sub surface lures… The boy couldn’t fail today and he also managed a nice fish on a big savage gear that he fished on a slow sink and draw retrieve. He really was showing me up! 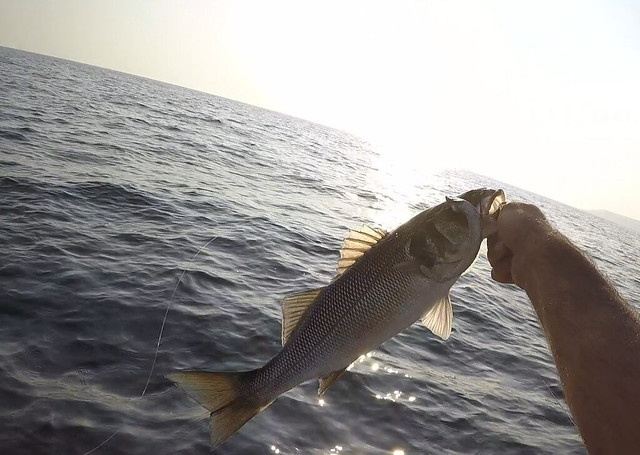 We finally switched back to the topwaters for the final part of the day. I was hoping at some point the action might have really kicked off but it never really did though we did seem to find the fish sitting on one side of the reef in particular. Will this happen again at this state of tide? only time will tell, I managed to finish the day off with a couple fish to the Grande salt skimmer that has never failed to tempt the fish yet. 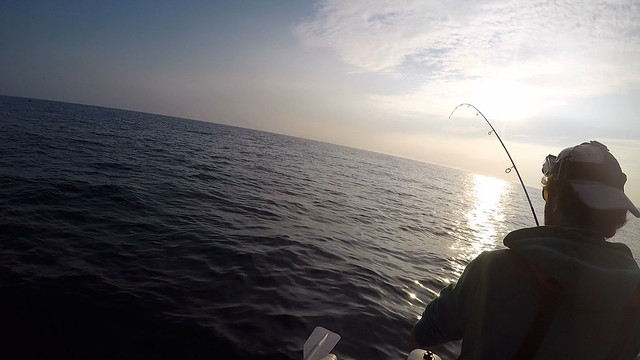 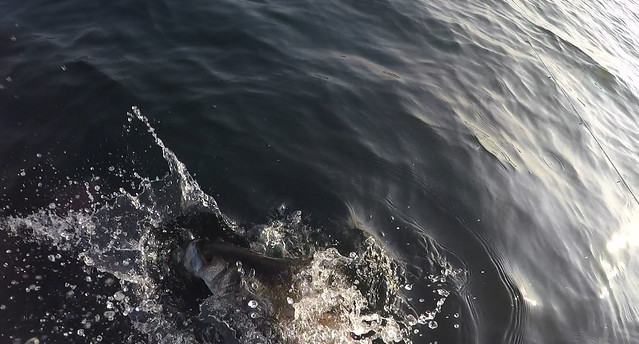 We ended the day on 21 bass as well as a few pollock and wrasse but it really was a poor show from me missing over 50 percent of the fish I managed to get a reaction from… Kory was mainly fishing a smaller lure than me for most of the day and mine had a louder rattle so was it this that go there attention but then made them unsure at the last minute? maybe I was working my lure a touch to quick or maybe it was worked to wide and not tight enough? Either way there was new things learned and experienced, topped off with a whole heap of laughter and smiles it made for an awesome day! 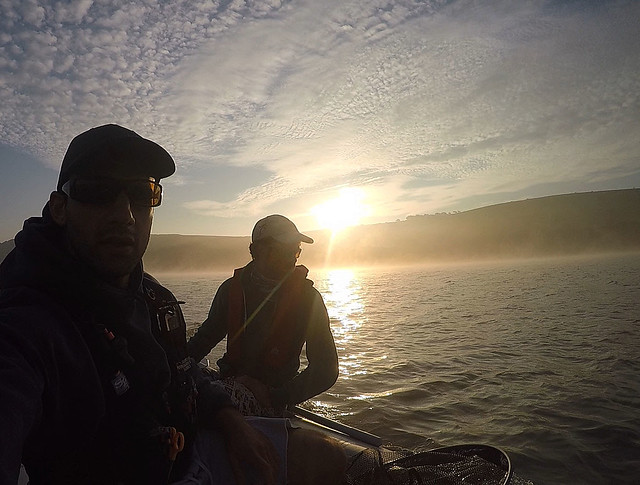