Turns out I reckon I’ve done more fishing from my SIB than I have from the shore this month! That’s crazy! and I guess lucky to get some good weather to be able to as well! I’m really enjoying some thing new at the moment and fishing from the boat is yet another learning curve for me. 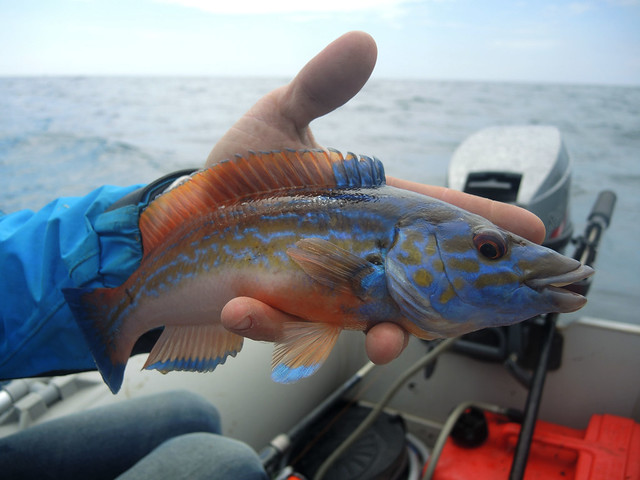 A stunning male Cuckoo Wrasse taken on a Fiiish Minnow 120 25gm
We have fished a few different reefs now and seen surface action each time. Once again we where fishing in maybe 20-30ft of water. I was fishing the Duo realis Pencil 110. A lure with a pretty loud rattle and something I’ve seen people mention before so I thought it was worth a shot. I had some good action but dropped a few good fish. On one drift Tim took a schoolie and as it got near the boat the shoal of schoolies followed. Seeing them in this crystal clear water was awesome and as they surrounded Tims fish, what looked like a good 4lb+ fish came up behind my lure but I think it was to near the boat and it turned away about a metre under the surface. 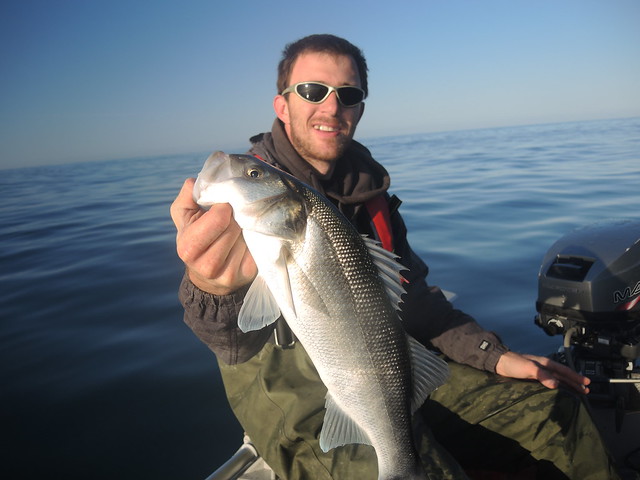 Tim with a 3lb+ Bass taken on the drift, why we didn’t repeat the drift is beyond me… For me the same rule applies on the boat as from the shore. ”If you find some fish then fish it!”
Another session with Mark on saturday saw us fishing over really shallow ground. I’ve never seen bass so finicky and they really wouldn’t commit to hitting the lures but it was still great to see. We did land a few schoolies each but the better fish eluded us. Twice Mark had fish leaping cleaning out of the water and one was a good 5lb+, this one actually hooked up but his leader broke… BAD ANGLING CENTRAL! I had them following my slowly twitched and popped gunfish right to the boat. Just swirling and nudging the lure. proper heart in mouth moment! 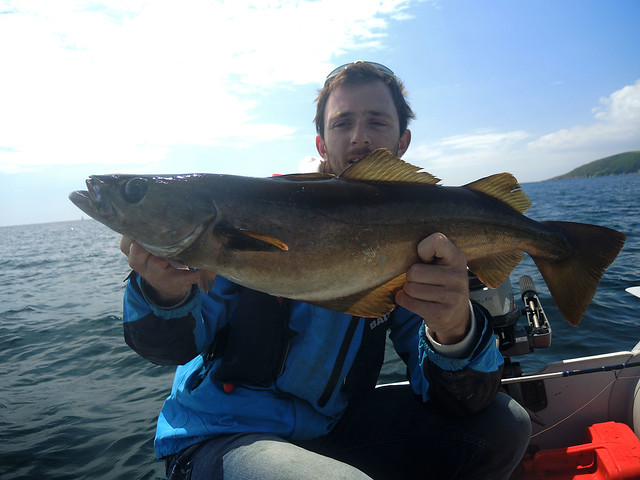 Tim with the best Pollock off the boat yet at 67cm, Taken in relatively shallow water close to the shore on a cast out and straight retrieve. Lure of choice was the Sidewinder in weedless in 40gm. They certainly work and are very tough lures!
After me asking for advice on fishing from the boat Matt gave me the confidence to trust my navionics again and we fished over a submerged rock. Or at least I think we did… To be honest I’m finding it hard to know which way the current is going as we always seem to drift with the wind and not the current. Either way I thought we where over the ”said” feature and I thought I was casting ”uptide” of the rock and bringing the lure over it. I fished a 20gm FBM 120 in Kaki, let it sink to the bottom and began a slow straight retrieve. I got the faintest of taps and lifted into a fish. It certainly felt like a bass and not a bad fish either. It came in pretty gently up until it reached the boat. Then the headshakes on the surface began and powerful dives… Soon it shook the hook. Nevermind i’m all for a quick release!
We set up the drift again soon after and I took another fish. This went 62-63cm and the first fish was bigger… nevermind I’m hoping there will be better to come. Still it was nice to fish a non visible feature and pull some fish from it like I had imagined. It’s now restored my faith in Navionics so hopefully we’ll be able to find a few more fish like this. It’s weird but I guess I never imagined times of tides to be so specific on the boat but it certainly is the case. Just my naivity showing there! Hopefully we’ll be able to see more action from this mark in the future. 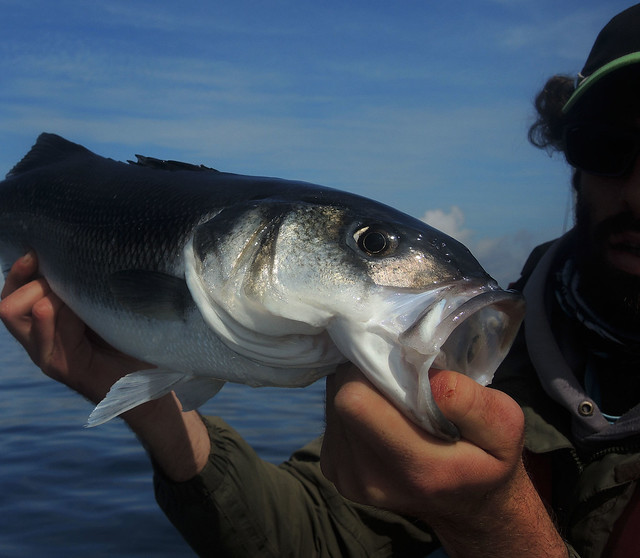 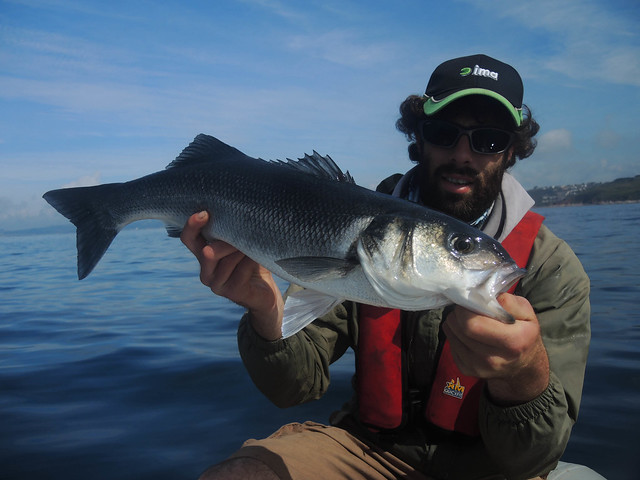 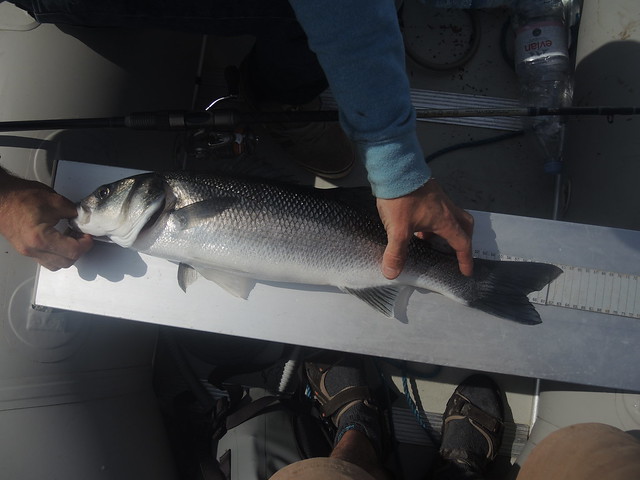 On one occasion we found ourselves drifting right in amongst the shore trying to get within casting distance. I always thought I would just use the boat to cover more ground and still fish within casting distance of the shore hoping to suss out new marks. We tried a few coves along a stretch of coastline we where near at the time and it paid off. I was using a Fiiish Minnow 120 Kaki on the 20gm Jighead. This is a good combo and for me seems to be my favourite of the Fiiish products. Have to thank Henry for that combo as I noticed he mentioned it in one of his posts a while back. I think I prefer the shore heads for casting and retrieving where as the boat versions dig in a lot more due to the line eye sitting further back on the jghead and I guess are more aimed at vertical fishing. Anyway I cast at a rock and pretty much landed on it, as I reeled the lure off the Bass must have shot out from under it and nailed it. 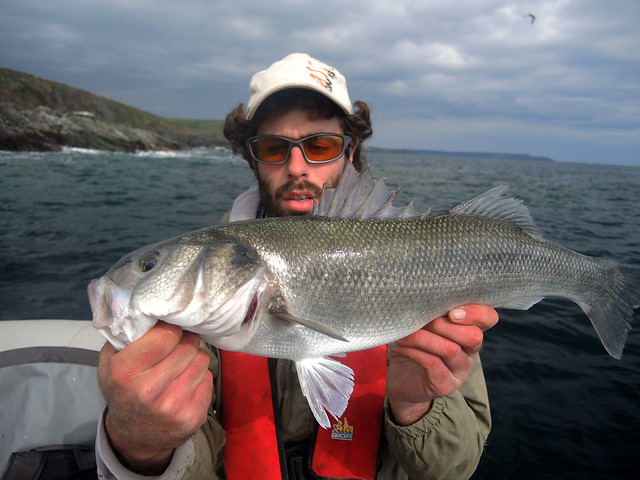 58cm taken basically on the shore… 120 Kaki Fiiish minnow with 20gm shore head on a straight retrieve
Bass love this approach of attack and they certainly hit with a lot more confidence than in open water. Another good reason to always fish close to any feature whether it’s casting along the shore off a beach, along a gully or even direcly over gullys where fish will be passing. If they see there meal quickly and don’t have chance to think they normally hit it without a thought. Open water more often than not if they have the time they will follow your lure suspiciously. Sometimes you’ll see the follow sometimes you won’t and the second time the fish probably won’t even care when your lure goes past them. I think going super slow can sometimes make them take. An easy meal is sometimes to hard to resist. Other days the meal that’s getting away is a must and there belly is calling for food. Crank that lure in. Sometimes the classic twitch, pause will trigger a hit but you really do have to make it look like an injured bait fish.
Sometimes I think it’s easy forget all these things that have worked for you in the past and it’s too easy to get carried away with something else that might have been working for you recently.  It’s all food for thought…